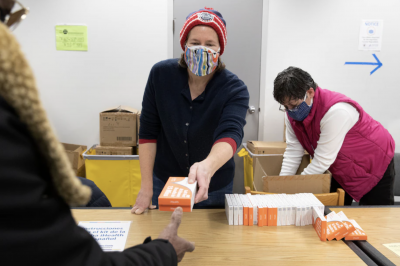 The federal website where Americans can order free coronavirus rapid tests will be launched Wednesday and allow each household to order up to four tests, senior administration officials said Friday.

The website, called covidtest.gov, will require that users provide their names and addresses to receive the tests. The government purchased 500 million rapid tests that will be available to every household, and will limit to four the number of tests sent to each address, the senior officials said during a briefing with reporters.

The officials said the tests would be shipped within 7 to 12 days after being ordered, a timeline that experts say means the tests probably will become available too late to significantly blunt the impact of the current omicron surge along the Eastern Seaboard, where the outbreak may be beginning to slow. But the tests could make a difference to the parts of the country that have yet to face the worst of the surge.

President Biden announced Thursday that the government would purchase an additional 500 million tests to help prepare for future surges, meaning the government will eventually make 1 billion free tests available. The senior officials said the White House has worked closely with the U.S. Postal Service to help set up the website and ensure that the tests can be distributed.